5 islands among the most beautiful of the Belpaese 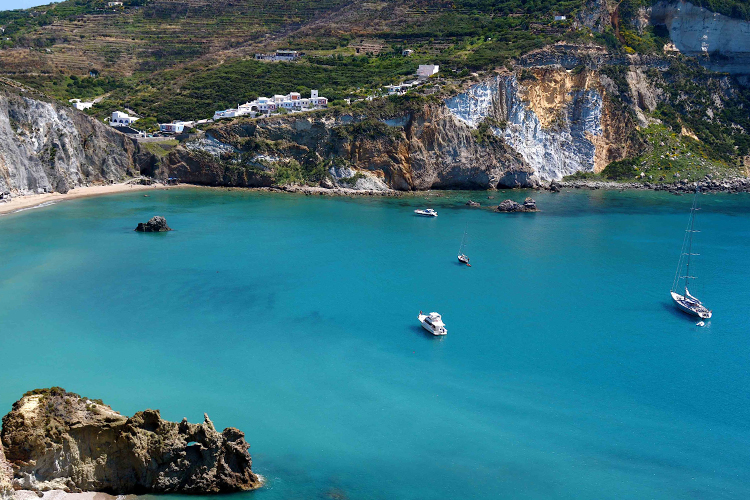 No country in the world has so many amazing and wonderful variety of landscapes such as Italy, thanks to the large regional differences that characterize the whole peninsula, where you can wander from the plains to the hills and mountains to the sea. Its fortunate position in the middle of the Mediterranean Sea in ancient times fostered the flourishing of civilization, and even today the Italian coasts are among the most popular and visited among the continent, relying on corners of pure and majestic beauty of nature. Today Italian Traditions will accompany you to the discovery of 5 beautiful islands embedded in the Mediterranean blue that are real natural treasures, envied and appreciated by tourists from all around the world, although less well-known than others destinations.

Not far from the Circeo Peninsula, in Lazio, the Tyrrhenian Sea is dotted with wonderful Ponziane islands of which Ponza is the largest with more than 7 km square. The territory is mostly hilly and characterized by typical Mediterranean flora and fauna, while the jagged and mostly rocky shores, create an enchanting variety of beaches and breathtaking caves, whose waters full of life are a destination for divers and tourists from all over the world.

Main island of the Egadi, Favignana is officially recognized as one of the most beautiful in the Mediterranean: a time queen of the traps of Sicily, is now one of the most popular destination of  international visitors, attracted by the numerous coves and caves considered among the most charming of Italy. But the beauty of Favignana are certainly not all natural: it is possible to admire immense traps overlooking the sea, the ancient and majestic limestone caves that seem underground cathedrals, or the magnificent castle of Santa Caterina, which was the palace, prison and barracks, and now abandoned.

A real gem emerged between Corsica and Tuscany, Capraia is 36 miles from the coast, has 800 meters of road in total, about 200 inhabitants, a small port and a single village at the foot of the ancient fortress. Everything else is Mediterranean vegetation and beautiful secluded bays. Being of volcanic origin, it has high and rocky coasts, which in the past made it an ideal defensive outpost against the many pirate attacks. In the past the island deeply rooted in tradition, following the unification of Italy became a penal colony, that led to the depopulation of the island, which, however, has been reborn in modern times thanks to its endless natural beauty.

True heart of the archipelago of Tremiti, San Nicola is a strip of elongated land, with a rugged coastline and defended by large rocks and cliffs along the sea. Although boasting a crystal blue sea, the island is more known because the great monumental ruins remained, only evidence of its past: towers, impressive fortifications, walls, churches, cloisters and the beautiful Santa Maria fortress-monastery in sea, inhabited for centuries by Benedictine monks. A lonely land of white cliffs and clear water, which make her the most beloved and characteristic of the Tremiti.

La Maddalena is the largest of the islands that make up the archipelago of the same name, opposite the coast of Gallura in Sardinia: the National Park since 1996 thanks to the beauty of its coastline, the transparency of its waters and the natural integrity of the environment, the island possesses coasts by indented coasts and often difficult to access, leading to coves and bays where you can enjoy breathtaking views. In the past it has long been a naval base of the Italian Navy, but today it is known for its extraordinary natural beauty and its picturesque village.

The flavour of coffee from the Lavazza museum in Turin

An emotional and sensory journey into the world of coffee In Italy there are many companies that have made the...

Romantic places in Italy: in Milan the ponte delle sirenette in Sempione Park One of the most well-known romantic...