5 Places to Visit in Mantua 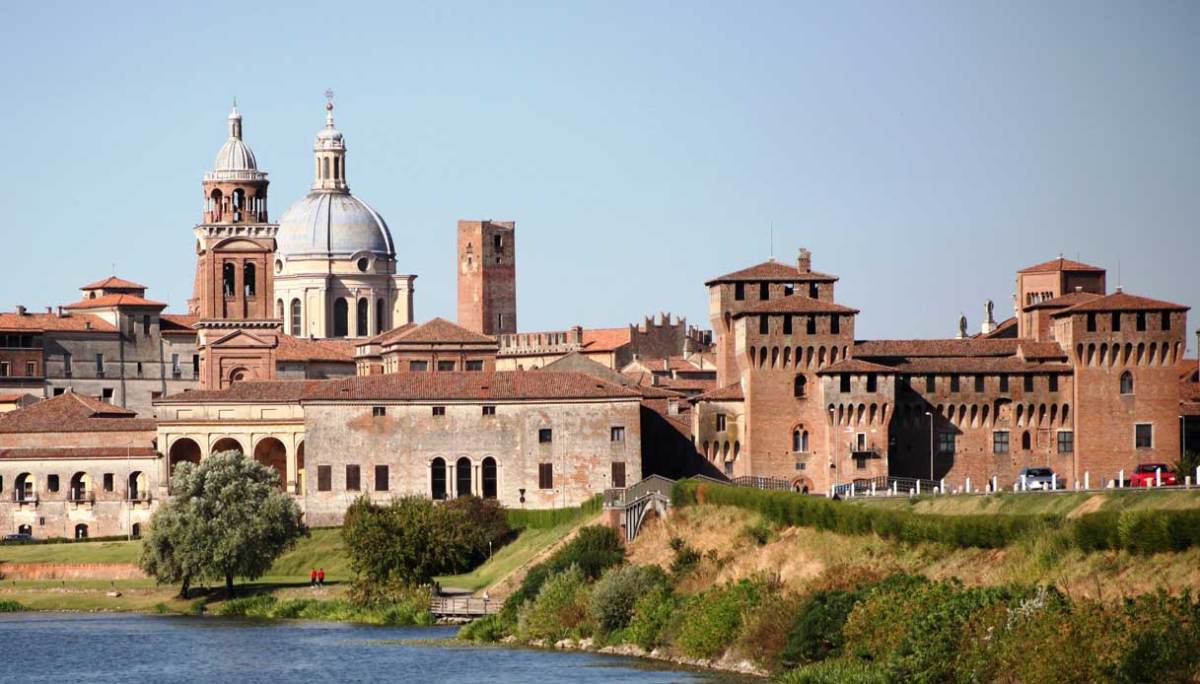 If you’ve never been to Mantua, maybe it’s time to go! This northern Italian city is home to numerous artistic and architectural masterpieces, not to mention breathtaking landscapes. A must-see! Mantua has fascinated generations of writers, from Torquato Tasso, Dickens, Huxley, Corrado Alvaro, to Baudelaire and the poet Guido Piovene, who have all in one way or another expressed the emotions and sensations that this picturesque city aroused in them. This is also where the great Latin poet Virgil was born. Mantua is surrounded by artificial lakes on three sides, which were made for defense and give it a look where it appears as though the city magically emerges from these waters in the middle of Mincio Park. Legend once said that these waters were tears from the prophetess Mantua, and that it can transmit prophetic powers to those who drink it.

The very heart of the ancient city is Piazza Sordello, a large rectangular square dedicated to the poet Troubadour Sordello, and cited by Dante Alighieri in The Divine Comedy. The cathedral, the Palazzo Ducale, the Palazzi Bonacolsiani are all centered around this main square. You can easily reach the city center by crossing over the San Giorgio bridge, which can be done both by foot or bicycle. The best place to start your tour of the city is at the San Giorgio Castle, a majestic 15th century castle commissioned by Francesco Gonzaga, making up the first part of Palazzo Ducale. High up on the right tower, you can see the Bridal Chamber (also known as painted chamber)window, where Mantegna painted frescoes in honor of Ludovico Gonzaga and his wife Barbara of Brandenburg. The cathedral, instead, is dedicated to St. Peter, and stands on the right side of the square. It is a very old building, which is worth visiting because of its unique architectural structure composed of five naves and covered with a plethora or artwork and paintings by Renaissance artists such as Ciampi, the Ghisi and Viani. (For more info, click here)

Take an afternoon to visit and admire this stunning structure built by the Gonzaga, who’s uniqueness is its immense size. It spans more than 34,000 square meters, and has more than 500 rooms, 70 apartments, 15 courtyards and gardens, and has the largest court in Europe. It is almost a city-palace where outstanding works of art were commissioned to artists, painters, architects , decorators and the most talented and well-known people at the time, in order to compete with the most prestigious European capitals. The building consists of several nuclei linked by tunnels and corridors, with streets, courtyards, interior gardens as well as hanging courtyards, with its interior containing infinite treasures. Among the must-sees are: the Bridal Chamber, Pisanello’s Rooms, the Old Court, the Apartment with Raphael’s tapestries, the room with the maze ceiling, and the widow Isabella d’Este’s Apartment. It is open to the public every day except Monday; Reservations are required for the Bridal Chamber. (For more info, click here)

The famous Bridal Chamber, also called the “painted room” is a chamber located in the north-east tower of the San Giorgio Castle. It is famous for the frescoes that cover its walls, a masterpiece by Andrea Mantegna, painted between 1465 and 1474. Mantegna elaborated the fresco decoration that took over all the walls and most of the ceiling, adapting to the architectural limitations of the environment, but at the same time breaking through the walls creating an illusion with the paintings, as if the space expands beyond the physical limits of the room. The general theme is a celebration of the entire political and Ludovico Gonzaga Dynasty, during the election of the Cardinal Francesco Gonzaga. An interesting fact: the Gonzaga’s loved dogs and horses. In fact, in the wing facing the lower lake there is a rooftop courtyard dedicated entirely to dogs, where a plaque commemorates ”Oriana in dog heaven”. Try not to miss Andrea Mantegna’s self-portrait among the floral motifs. (For more info, click here)

When speaking about this place, the famous artist Giorgio Vasari said it was, “A little place where he could go and enjoy himself for breakfast, dinner or just for fun”. The palace was completely designed, decorated and painted by Giulio Romano, who worked with Raphael. It is a wonderful example of technical expertise, color, architecture and painting in the Renaissance style. The ancient training base Ludovico Gonzaga’s beloved horses, the Islet of Tejeto, or Te (for short), once a marshy swamp was chosen by Frederick as a great place to build a residence destined exclusively to receive and entertain and amuse the most honored guests, in the company of his lover Isabella Boschetti. The Great Hall of Horses (the ballroom), the Eagle Room (the Duke’s bedroom), and the Love and Psyche room (dining room), are all painted splendidly with pagan mythologies and fairy tales, which allude both to Federico’s love for Isabella and the Gonzaga’s love for horses and other characteristics of Federico’s personality and that of his voluptuous tendencies. (For more info, click here)

The co-cathedral of thee city overlooks Piazza Mantegna, just a few steps away from Piazza Sorello and Piazza delle Erbe. It is the largest church in Mantua, made by Leon Battista Alberti, who managed to create a masterpiece of Renaissance architecture, but also an example of sacred space recreated in many churches scattered around the world. Famous artists who collaborated with him include Mantegna, Correggio, Juvarra and Canova. The interior consists of a single wide nave covered by a barrel vault built between 1490 and 1495. The best-known chapel within the Basilica and’ the one named after St. John the Baptist, known worldwide because it is here where Andrea Mantegna arranged to be buried, in 1504, two years before his death. Most notable is the crypt, which houses two shrines with the ground stained with the Precious Blood of Christ, brought here by the Roman soldier Longinus. Mantegna recalled the Baptism of Christ depicting it on the right wall, and the Holy Family, and the family of John the Baptist, on the altar. Among the other works of art those that stand out include a great altarpiece, the Virgin and Child enthroned around Saint Sebastian, Saint Sylvester, Saint Augustine, Saint Paul, Saint Elizabeth, Saint John and Saint Rocco, painted by Lorenzo Costa il Vecchio. (For more info, click here)

Tagliolini with black truffle from Norcia

5 Ancient Villages to Visit in Italy

Welcome to an ancient Italy of times past, an Italy that possessively guards and preserves its legacy, which has...

Umberto Rosolia takes us to Matera, the City of Stones. And it is precisely from these incredible agglomerations of...