Arezzo Wave has become a real institution within the Italian music scene. The event – born in 1987 from an idea by Marco Valenti, and dedicated to rock music – is the launching pad for young local rock groups, and really involves the entire city of Arezzo. The first edition gave wide visibility to 16 emerging Italian groups but, in the following years, the event was also open to emerging bands from the European scene.

On the Arezzo Wave stage, groups such as the Mano Negra and the Afterhours, the Almamegretta and the Agricantus, Ritmo Tribale and Frankie HI-NRG have appeared, to name a few. And, one edition after another, the promises of the Italin music scene have been joined by international artists such as David Byrne, Nick Cave, Ben Harper, Sonic Youth and Moby, and “local ones” such as Jovanotti, CCCP, The Gang , Elio e le Storie Tese, 99 Posse, Marlene Kuntz, Gianna Nannini … 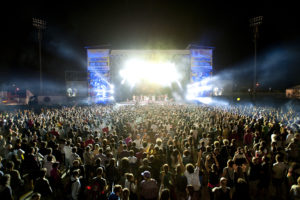 The mechanism is simple: the bands wishing to compete subscribe to the Wave Contest, and they can play in the “friends” festival of the event, such as Collisioni and Rockin ‘1000, while the contest winners will be able to perform on the European festival stages such as Eurosonic Groningen – MAMA Paris – MIL Lisbon – BIME Bilbao.

Arezzo Wave is also the richest music event ever, having had over the course of its history over 1900 concerts, hosting for each edition at least 70 concerts, events and meetings. Among its merits, as well as that of enhancing and launching emerging groups that will later become real musical phenomena in Italy and abroad, there is also that of having made electronic music and the live scene a real phenomenon, becoming the crossroads for the best indie and pop artists in circulation. And, moreover, to have given life to a completely winning formula: the one that sees music and literature, cinema and comics, theater and visual arts mixed together, actively contributing to the spread of culture in the broadest sense of the word.

Arezzo Wave Love Festival, this is its complete name, is divided into three stages.

The Main Stage, the historical stage of the event, has hosted all the Big names of Italian and foreign music since 1987. That is, the names of singers and musicians who soon became big names and stars of the Italian musical scene but also of the world. An example for all Ben Harper, who took the stage in 1995 and immediately became one of the world’s greatest musical star … The Mail Stage opens its works with the emerging group winner of the Arezzo Wave Band contest, then hosting the best proposals from the Italian and foreign artists. The Psycho Stage is the afternoon stage of Arezzo Wave, and hosts the most eccentric and original proposals. From here, Vasco Brondi, Bugo, Tre Allegri Ragazzi Morti, Assalti Frontali, the State Social, Tonino Carotone, have all passed. Finally, Cult Wave.

It hosts a rich and varied overview of cultural events and products, events, shows and round tables. Here we present books, we meet writers and journalists, we attend shows and installations. Among the excellent names of writers, journalists, artists and actors of the Cult Wave program we remember Luis Sepulveda, Wu Ming, Ascanio Celestini, Marco Paolini, Carlo Lucarelli, Marco Travaglio.

The anniversary of the first expedition to K2

The summit was reached by the first expedition on July 31, 1954 In history there have been many very important...

The Etruscan Museum in Milan is scheduled to open in mid-2019 . The project is dreaming big and promises to be a...