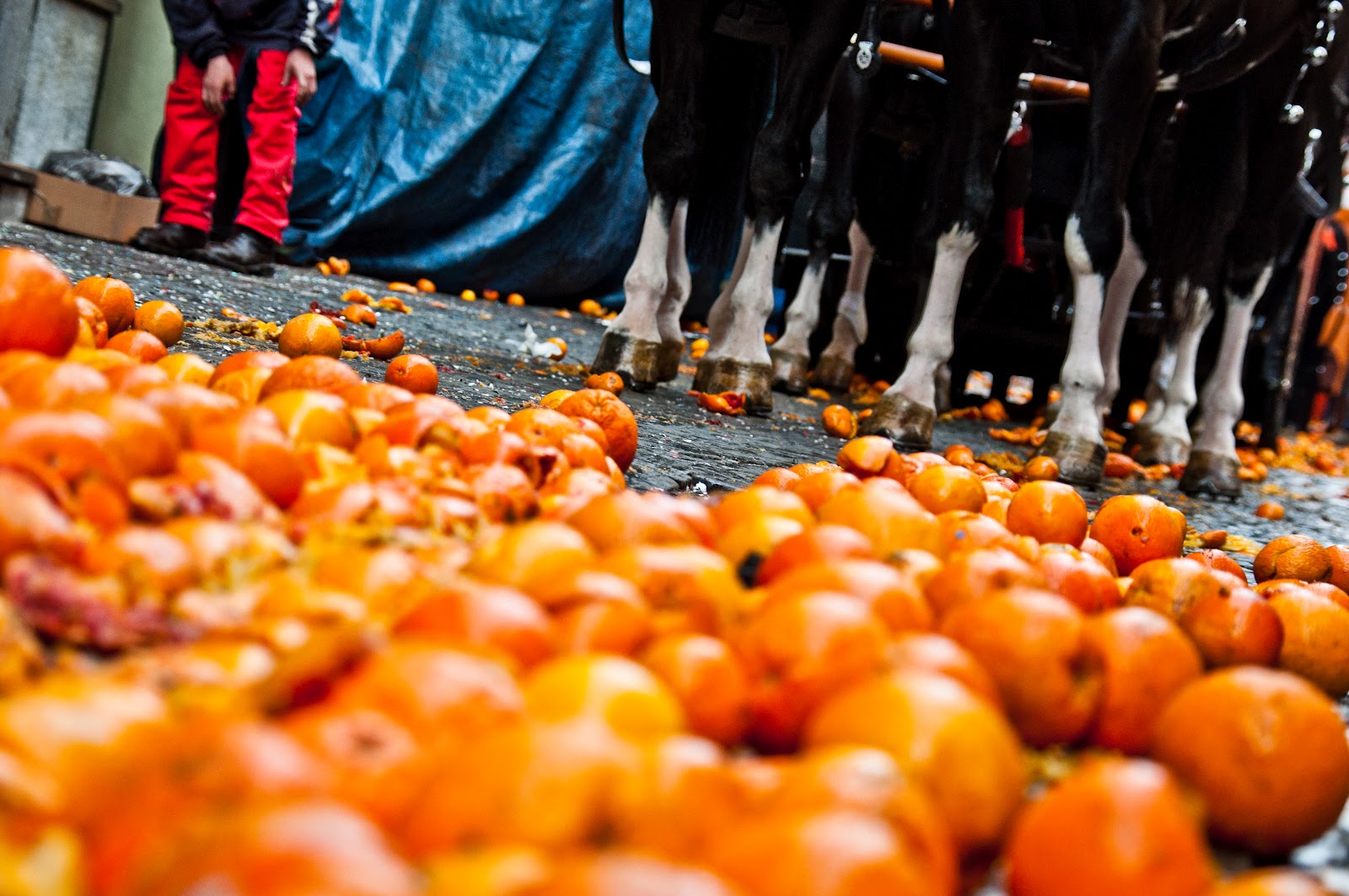 Many Italian town take pride in their Carnival parades and traditions, but none so much as Ivrea, where the whole affair takes on an important historical meaning. Strongly independent and proud, Ivrea was the hub of the revolt against aristocratic landowners of 1200, known astuchinaggio. The word derives from the French for ‘killing the dogs (of the rich)’, which along with the red basque was one of the adopted forms for the revolution.

What ignited the revolt was an act of defiance by Violetta, a miller’s daughter who had been forcibly betrothed to the local lord, baron Toniotto. When he summoned her to his castle to “marry” and assault her, she got him drunk then beheaded him, finally raising the citizens in arms against the aristocracy. Centuries later, when the land owners were nobles no more but simply richer than the peasants, another historic revolt came when the people refused the pitiful bean satchels granted by the nesters. Instead of accepting, they turned the beans into projectiles and pelted the arrogant tyrants.

These two events have been reenacted in one form or the other since the middle age during the Carnival. In the Eighteenth century, however, a third key event took place. The celebratory launch of beans from the windows onto the parade had evolved into throwing flowers, confetti and “rare” fruits – especially by girls aiming the most handsome boys to be noticed. When it came to oranges from the French coast, however, they hit hard enough to make the boys retaliate in jest launching them back. Little by little the “fight” grew enough to prompt a military general to forbid “such a dangerous sport” in 1854 – to no avail.

All of the above conspired into creating the now traditional Battaglia delle arance (‘oranges fight’) of Ivrea, held during the last three days of the Carnival and involving about five thousand people divided into nine “orange handlers” teams and one batallion of fifty horse-drawn chariots representing the aristocracy army. The idea is simply to hit your opponents as strong as possible with the oranges and force them out of the game as the parade moves through the oldest part of the town: judges try to keep track of the mess and award a winner at the end of the third day. The oranges fight does get very intense and rather dangerous. Those who don’t want to be involved must wear a red basque, and tourists are customarily kept safe (but not dry) behind tall metal nets erected all along the parade route. The battle tends to overshadow the other carnival rituals of Ivrea, some of them just as much historically interesting – and mostly related to the Napoleonic era. Still, who could underplay a riot involving tens of tons of oranges?

The Representation of the Passion Holy Week in San Pier Niceto

The Good Friday procession at San Pier Niceto, also called the “Varette”, is a tradition of Spanish...

Footwear, A Long Tradition Made in Italy

From fabrics to metals, from food to leather, from wood to stone, from ceramics to glass: the value of artisanal...