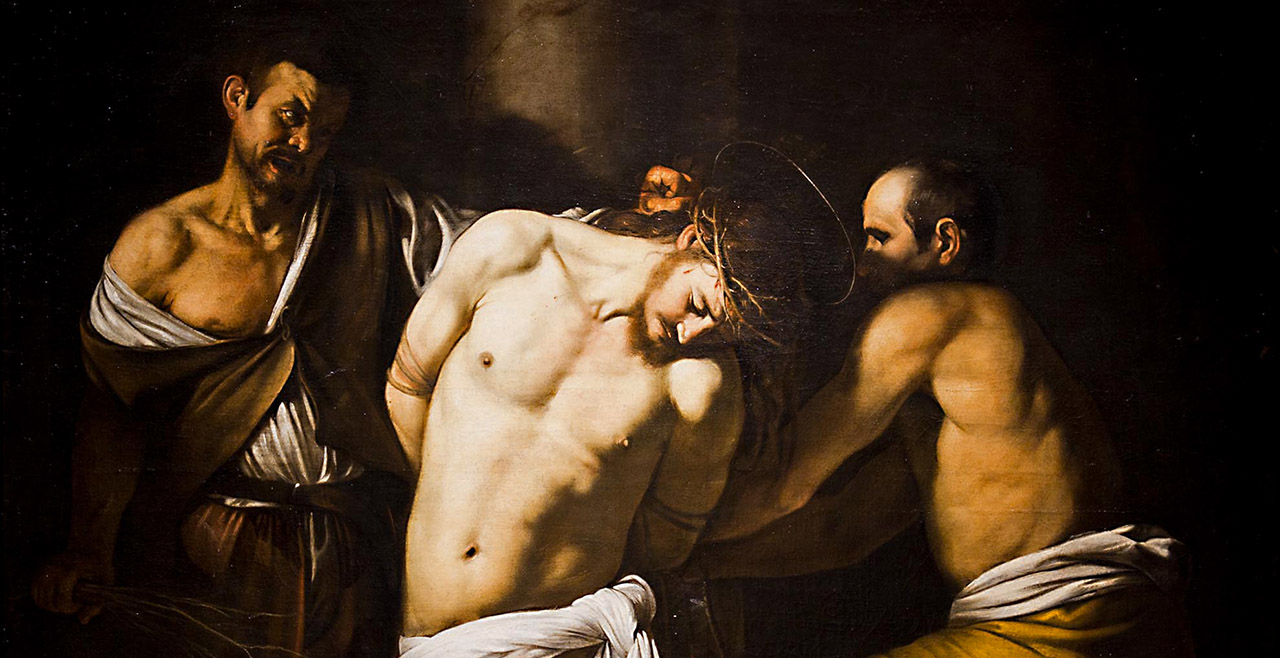 Michelangelo Merisi, known as Caravaggio, is one of the greatest Italian painters of all time.

Born in Caravaggio on 29th September 1571, he entered the painter Simone Peterzano’s workshop in Milan as a student, following the Lombardy and Venetian pictorial tradition of the 16h century. After the apprenticeship phase he moved to Venice, and there he was able to study the masters Tiziano, Giorgione and Tintoretto.

In 1592 he went to Rome, working with Antiveduto Grammatica, Lorenzo the Sicilian and Cavalier d’Arpino. Here he began to earn money painting portraits of young people taken from the street and putting them alongside fruit and glassware, and he decided start out on his own. The Roman years are particularly marked by the turbulence of the artist, and by numerous complaints related to violent acts and a disorderly life.

It is from the Roman period that some of his most famous canvases date back, such as the portraits in the mirror, among which is the so-called Sick Bacchus. The success comes with I bari, a picture commissioned by Francesco Maria del Monte, a Florentine cardinal who put him under his protection and took him in service. After this masterpieces such as the Head of Medusa, Judith and Holofernes, and St. John the Baptist arrive.

Great noble families like Barberini, Borghese and Mattei become his clients. In 1597 three masterpieces The Vocation, The Martyrdom of St. Matthew and St. Matthew and the Angel, are painted for the Count Contarelli in St. Luigi dei Francesi. The early 17th century  inaugurates the Crucifixion of St. Peter and the Conversion of St. Paul, and also mark the first “difficulties” the painter encountered in proposing his art …

In these cases, he was forced to re-paint the canvases after they had been refused for their “irreverence.”

And the same inconvenience will later happen with the Death of the Virgin, painted for the church of Santa Maria della Scala (today displayed at the Louvre in Paris). It is during this period that his painting of light and shade assumed the characteristics that will make him forever famous.

1606 is the turning point of Michelangelo Merisi’s biography. In that year, in fact, he killed Thomas Ramaccioni in a duel – and he was injured – during a fight that broke out during a game of Pallacorda. Caravaggio fled first to Naples, and later to Malta, where he would be arrested because of a violent confrontation with a noble Knight. He escaped from the Valletta prison, and took refuge in Messina, then again in Naples, where he was seriously injured.

Works attributed to this time are Seven Works of Mercy, the Flagellation (Naples), the Decollation of St. John the Baptist and the portrait of Alof de Wignacourt (Malta), the Burial of Saint Lucia, the Resurrection of Lazzaro (Messina). Grace for the murder was granted by Paul V Borghese after painting David and Goliath. He died in Tuscany at Porto Ercole, where he was arrested while waiting for grace. He will die on the beach, devoured by “malignant fever” in 1610, at the age of 39.

“Revolutionary” painter, Caravaggio left to posterity an imposing pictorial patrimony, and continued to influence Italian art even after his death. Many painters followed in the footsteps of the Lombard artist, and with them the tendency of Caravaggism was established. His pictorial technique, the representation of moods, the corporeality and the use of contrast between light and shadow became points of reference for generations of artists.

The revolution was accomplished: sacred representations had entered the human sphere.

International Exhibition of Machinery, plant and Technologies for the Agricultural Industry

On February 3, 1957 on the National television Network – Rai – A programme that made the history of television was...