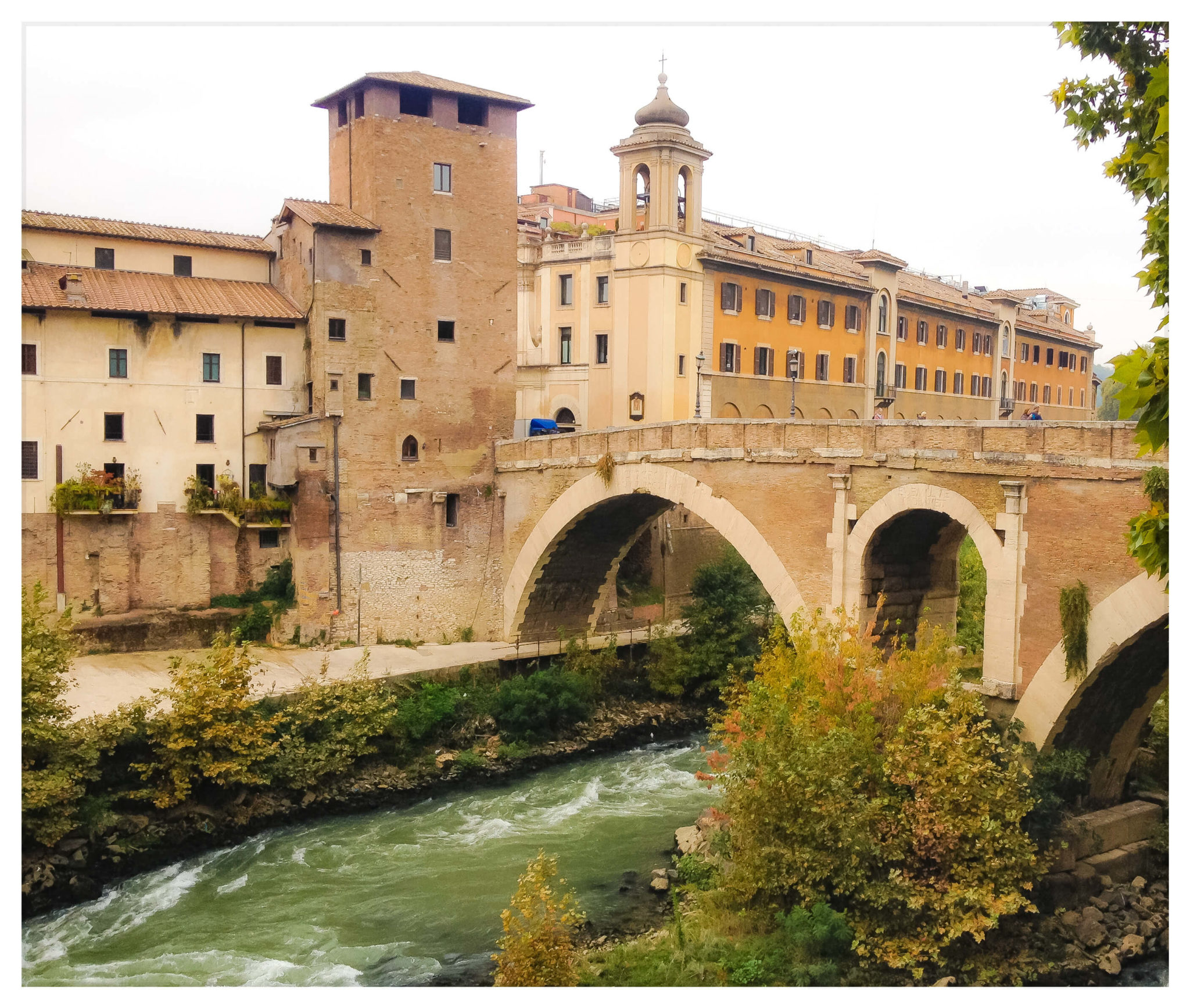 Rome is an immense, multifaceted, grandiose capital city. Perhaps the only real metropolis among Italian cities. For an on the road trip, starting from a photo catching a glimpse of the Isola Tiberina, embarking on a cross-cutting route, rather than the architectural grandeur that tells the story and the glories, exploring the most fascinating and evocative city.

Starting from the Isola Tiberina, the heart of Rome, which is connected to the two banks by the Ponte Cestio and Ponte Fabricio. Legend has it that it arose from the sheaves of wheat that were harvested in Campo Marzio, a place of extraordinary beauty: a ship surrounded by the waters of the Tiber on which once stood the ancient Temple of Aesculapius, the god of medicine – where now the church of San Bartolomeo is visible – along with other sacred structures.

Crossing the Fabricio Bridge you reach the big Roman Teatro Marcello and immediately after the Portico d’Ottavia. The whole area was built in a monumental way, hosting temples, the “Portico di Metello”, once decorated with works of art of Greek origin, the Circo Flaminio. The historical charm of this neighborhood, however, is also linked to its inclusion within the Ghetto of Rome.

And here, in fact, much of the Capitoline Jewish tradition is preserved, testified by the presence of typical restaurants – where the recipe of the famous “artichoke alla giudia” triumphs, and traces of a history testified by signs, gravestones and engravings that recall the past . An ideal place to wander aimlessly savoring all the taste of the ancient “urban landscape”. Not far away, on the same bank of the Tiber, stands the famous Bocca della Verità, visible within the beautiful church of Santa Maria in Cosmedin.

The Basilica was built on the edge of the Roman Forum Boario, on an area that also housed the maximum Ara of Invictus Ercole, initially with the name of Santa Maria in Schola graeca. The area in fact was characterized by a strong presence of Greeks. The first testimony of this church dates back to 772, while the intervention of Pope Adrian I dates back to 782, who remodeled it by using the blocks of the Ara of Hercules.

Subsequent interventions in the Middle Ages and in the 19th century gave it its current appearance. Preserving, walled under the portico of access, the so-called Bocca della Verità. It is a mask, depicting a bearded man, who in Roman times acted as a manhole, to which the legend attributed the power to pronounce oracles. But also to be able to reveal the truth or unmask lies.

Walking along the Palatine Bridge, you return to the right bank of the Tiber, entering one of the most authentically Roman neighborhoods, despite the fact that life here is linked to the intense tourist activity. Trastevere, which owes its name to the Latin “trans Tiberim” – beyond the Tiber – was dominated by the Etruscans, then passed under the control of the Romans, who connected it to the oldest part of the city by building the Sublicio Bridge.

Here arose the area inhabited by sailors and fishermen, and colonized by Jews and Syrians. Today it preserves the shape assumed in the Middle Ages, with narrow and tortuous streets, a sort of labyrinth in which the poorest Rome went alongside that of the houses of noble families. While the Trasteverini, by tradition, were considered a part of the population in its own right: proud and sincere men, women of particular beauty.

The charm of the neighborhood is still palpable, and the echo of that world still resounds in the streets covered with cobblestones, in the memory of the poet Trilussa and Gioacchino Belli. And in the immense “scenographic” effect that blends together houses that retain all their charm dating back to the Middle Ages, the monumental complex of San Michele a Ripa Grande and the Basilica of Santa Maria in Trastevere, the baroque residences of the Roman nobles, the ‘Acqua Paola.

The itinerary ends here, perhaps with a stop in one of the many pubs that populate Trastevere. Rome is really so big it has  to be explored one piece at a time.

Why is a women's day celebrated in Italy?

The ancient village of Bussana Vecchia

The artist’s village near Sanremo In Italy you can find many ancient villages that are experiencing a recent...

5 Things to see in Turin

Elegant and shrouded in a fascinating mysterious atmosphere … Turin is an extremely interesting stop for...