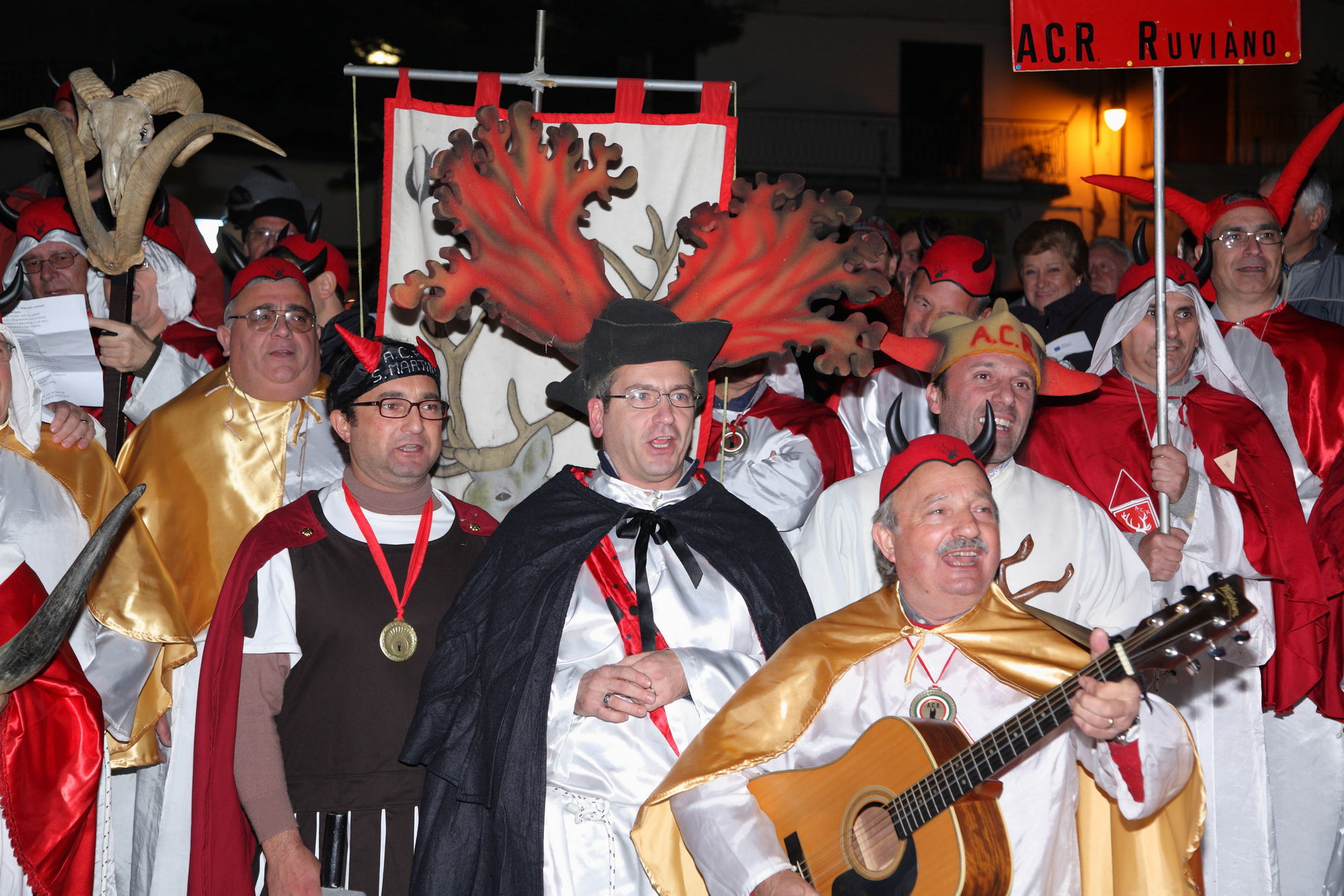 The Festa del Cornuto (having horns on ones head is the symbol of a betrayed man) and the Rola (chestnuts) fair are held in Rocca Canterano, in the province of Rome, on November 11th.

During the festival – whose date coincides with the anniversary of San Martino – the Burlesque procession plays an important part, with groups of people wearing long white robes, and wearing a pair of horns on their heads, parading through the streets of the village while visitors mock them and make them the object of ridicule. Then, the King of the Horned appears, seated on a throne carried by men through the town, holding a flask of new wine. And a poet, dressed in red, who declines verses in dialect dedicated to the “misadventures” of married life. All this is accompanied by the tasting of food and dishes of the ancient Lazio tradition – including beans with pork rinds, sandwiches with sausage and chicory, roasted lamb skewers, barbecued chestnuts, the “role” precisely – all washed down with red wine produced in the area. It is fun to know that even the characteristic homemade pasta, which is proposed during the festival, is called “cecamariti” (blind husbands). In fact, the event is a particularly important moment in terms of food and wine, thanks to the proposal of all the culinary specialties of the area, including the renowned chestnuts from the surrounding woods. Overall, however, the festival is characterized by its strong goliardic and pagan character. This festival, typical of the Lazio tradition, in fact, refers to the ancient pagan rites – later Christianized and transformed into fairs – in which everybody let loose and ran a bit wild, with the risk of seeing one’s partner taking an “alternative road”. In addition to the costume parade, the festival includes folk music and shows, and is one of many examples of great Italian folk traditions. 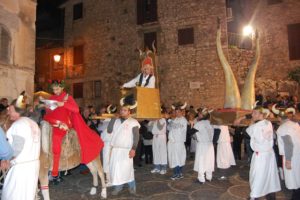 As we said, the Festa is held on the day of San Martino, considered, since then, the Protector of the betrayed man. According to legend, the saint lived in Rocca Canterano, together with his sister who was in love with a young man from the area. Martino, who was terribly jealous of his sister, is said to have carried her everywhere on his shoulders to avoid her consuming her love with the young man. The two lovers, however, managed to evade the surveillance of the saint, taking advantage of the fact that the girl had hidden behind some bushes to relieve herself …

In the tradition of the village, whose history dates back to the Roman conquest in the territory of the Equi, there is also the famous “Ratto delle Donne”, which saw the women of Canterano kidnapped by soldiers and shepherds who lived nearby. Event that later saw the establishment of a Reconciliation Day, where food – once again – played an important role. With the famous “cecamariti” in mind, replaced in the last century by a more sober “refreshment”.

A must see, in Rocca Canterano, the fortified complex of the thirteenth century, the Parish Church of Santa Maria Assunta – excavated and built in the living rock – and the patrician houses: Villa Marcotulli and Palazzo Moretti, the latter built on the ruins of an ancient tower.

The 1st of May was established as Labour Day even before 1900, and is considered a national day of rest aimed at...

The celebration of San Cataldo is one of the Italian religious festivals in which, the patron saint of Taranto,...