It is the queen of Tuscan cuisine and one of the symbols par excellence of Italian gastronomy. The Florentine steak is a high cut of beef or Chianina beef, characterized by a specific and traditional preparation, which is cooked on the barbecue or on the grill, “rare”. 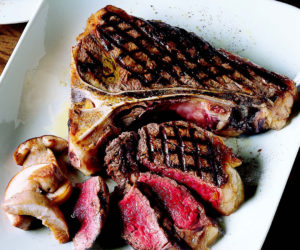 The history of this cut, which is obtained from the “loin”, goes back to time immemorial, and is linked to the Feast of San Lorenzo, which occurs on August 10, the day in which the Medici family – around 1565 – used to light up the city of Florence with large bonfires and roast large quantities of meat to be distributed to the population. On one occasion, a group of English merchants and businessmen, finding themselves in Florence, were attracted by the smell of roast meat, and asked to taste it. That was how they shouted “beef-steak”. The word bistecca, therefore, comes from the English word, which the Florentines first appreciated and wanted to include in their vocabulary. The term “Bistecca alla Fiorentina”, however, made its official appearance only in the nineteenth century, during the Universal Exhibition in Paris, to indicate a cut of meat displayed in the Italian Pavilion representing Tuscany.

The characteristics that identify the true Florentine Steak make this delicacy a real institution. The meat used, as mentioned above, must come from chianina beef. The cut must include the well-known “T-shaped bone”, and contain the fillet and the sirloin. Its thickness must be at least three fingers, while the weight must exceed one kilo. Prior to preparation, the steak must be aged in the cellar or cold room for at least two weeks. Dry maturation allows to lose the excess water contained in the meat, while at the same time concentrating the flavor internally. At the time of cooking, the meat used must be at room temperature, and preferably on embers of oak, olive and holm oak. The steak should not be seasoned, and cooked for no longer than five minutes – depending on the size of the cut – with precise rules that also cover the distance from the embers and the height of the flame. Once cooked, it can be seasoned with extra-virgin olive oil, salt, pepper, rosemary or garlic. 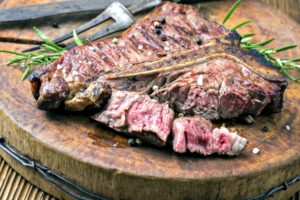 These are the characteristics of the famous steak as established by the Florentine Academy:

“The meat must have a pinkish color with a thin covering of slightly amber-white fat, a velvety feel to the touch and a faint smell of aged meat just at the right point”.

It is, of course, a Florentine specialty, and can be enjoyed not only in restaurants and taverns, but also bought in the butcher shop to be prepared at home. 100 grams of Fiorentina contain about 260 calories, 26 grams of protein and 17 grams of fat.

A classic recipe, gastronomical patrimony of Puglia, orecchiette with broccoli rabe is a type of pasta that veers...

5 of the best desserts in Italy

That Italy is, due to its numerous successes in various fields, is one of the most popular countries among...