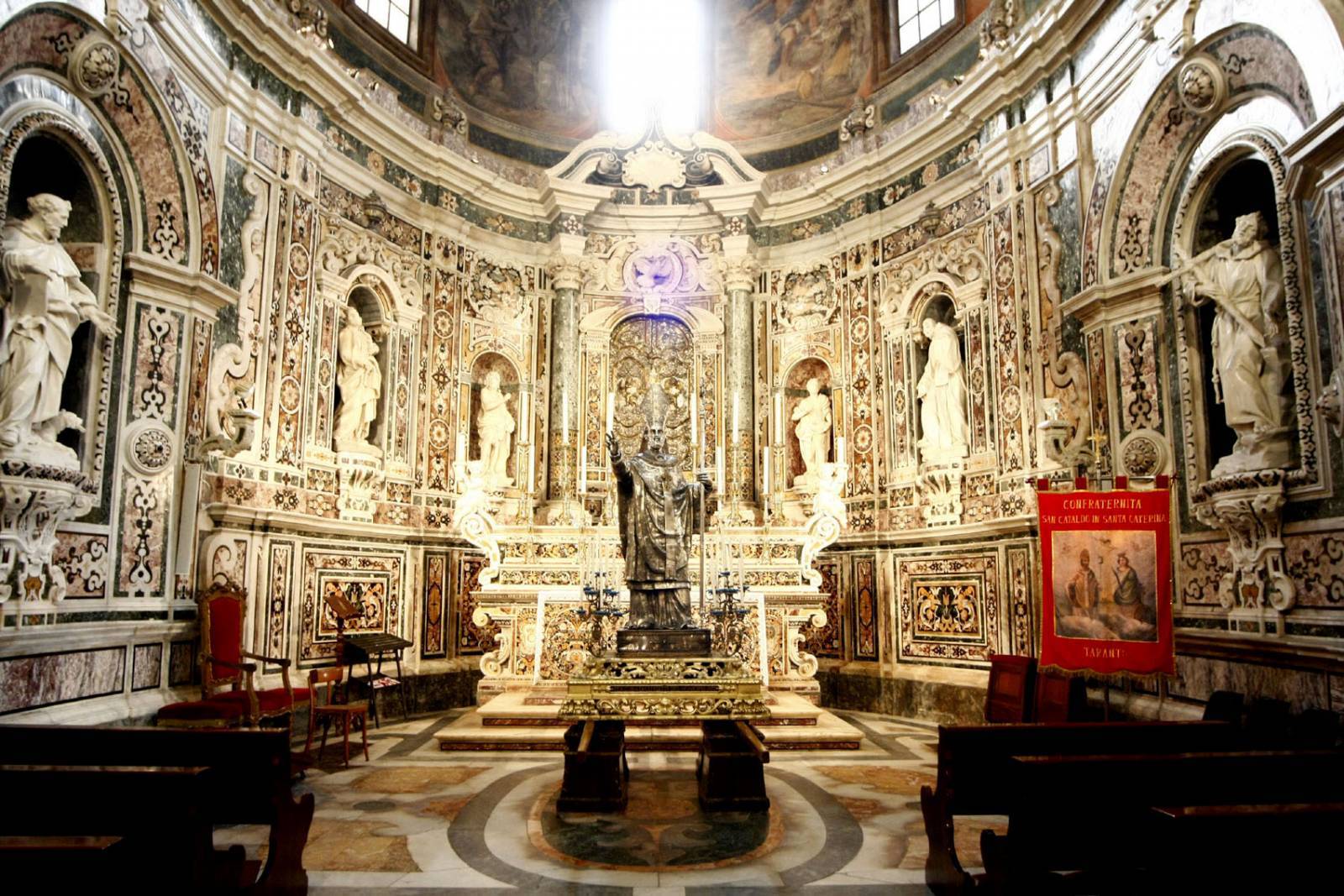 The celebration of San Cataldo is one of the Italian religious festivals in which, the patron saint of Taranto, precisely, San Cataldo is celebrated. The saint was attributed with an infinite number of miracles, which still makes him a point of reference for the inhabitants of the city, who are extremely devoted to him. In his honor, the city organizes three whole days of celebrations every year, which involve events, music, processions and fireworks, including the famous annual regatta, or the “Palio of Taranto”.

Every year in May from 8th to 10th of the month the city of Taranto gets ready to celebrate one of the most important Italian religious festivals of the year in which the patron saint of the city, San Cataldo is celebrated. The tradition of Taranto attributes to the Saint a vast number of miracles, among which giving sight to a blind child and a voice to a young mute shepherdess. The remains of San Cataldo were buried in Taranto and at first were lost because of the destruction of the cathedral at the hands of the Saracens but were fortunately brought back to light in the course of some restoration works. The body was recognized thanks to the golden cross worn around his neck, with the inscription “Cataldus fa Chiri”. 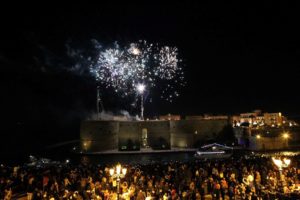 Who was San Cataldo?

San Cataldo patron saint of the city of Taranto was a monk born in Ireland during the early years of 600 A. D. The man became the patron saint of Taranto following a miracle which happened during his pilgrimage to the Holy Land. It is said in fact, that God ordered him to catechize the city of Taranto and while trying to reach the city he ran into a storm and landed on a beach. He launched a ring at sea and managed to stop the storm and even bring back to life a sailor who had drowned. Near the place where the launch occurred, a small underwater spring was formed, known as the “the Fonte (spring) of San Cataldo” which is still visible today. At his death, the man’s body was buried in the Cathedral of Taranto. The church was destroyed by the Saracens and the remains were lost, but fortunately they were found during a renovation in 1094.

The celebrations for the festa of San Cataldo in Apulia begin on the evening of 7th May and continue until the 10th of the same month. During this Italian religious celebration there is a procession of the statue of the saint through the streets of the city planned for the days of 8th 9th and 10th. The procession starts at 6.30 pm and a stops at 11.30 pm , followed by a firework display and, on the closing night, spectacular pyrotechnics. The tradition wants that after the procession the statue of the saint is taken out to sea aboard a ship of the navy, and escorted by many smaller boats. In the city there are shows, gastronomic fairs and the famous Palio of Taranto, a competition between rowing boats.

What to see in Taranto? Where to eat? 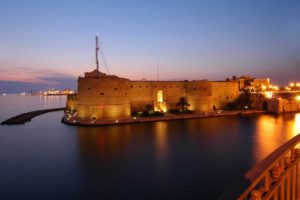 Taranto is one of the most beautiful cities that Apulia  has to offer. This charming town offers a perfect combination of breathtaking panoramas and nightlife. Among the most beautiful places to visit in Taranto we must definitely name the Aragonese Castle, with its enchanting view of the sea, and the Archeological Museum of the city, containing an endless number of priceless finds. Taranto is also famous for its excellent cuisine, which is mainly based on fish given the great availability of fresh produce and the presence of an important fish market. If you are wondering where to eat in Taranto during the celebrations of San Cataldo, we must suggest the famous Ristorante Pink and the Galleria del gusto Moma .

Now that you know all about the Italian religious celebrations and in particular the tradition of San Cataldo, all you have to do is organize your trip to Apulia, to experience it in person.

Events in may in Italy: Il maggio dei libri, save the date!

Among the many fairs in Italy in June, the Festa del Pescato di Paranza of Castellabate represents a fairly recent...

The Italian Easter Recipes are able to meet the tastes of almost anyone. From the point of view of food and wine...