Marostica: culture and tradition in Italy 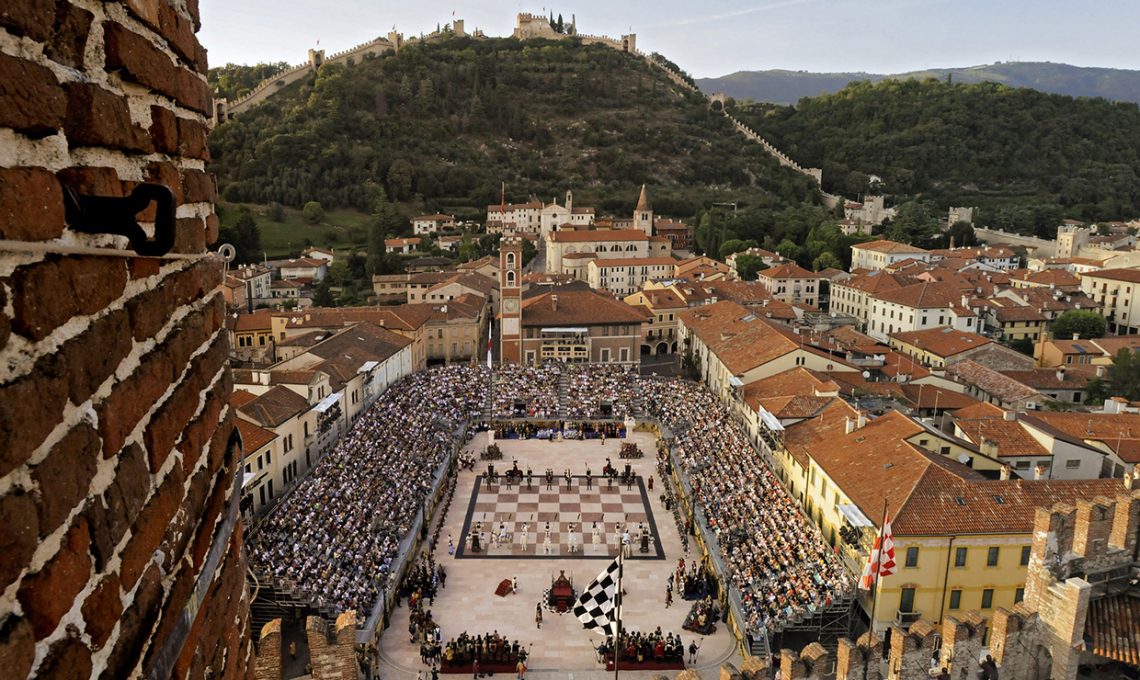 The legendary game of living chess

There are many historical and cultural events that take place every year in our country. One of the most fascinating is the one that takes place in the Venetian city of Marostica. This is the famous game of living chess that still takes place every two years in the castle square. Italian Traditions will lead you on the discovery of this fascinating event. Here you can find information on its history and how to play this game. We also explain where it takes place and how to access the representation.

The chess game with living characters

Marostica is a city of the Veneto region in the province of Vicenza and is famous all over the world for the traditional event that takes place on the second weekend of September of even years. Here since 1923 the traditional game of living chess takes place. This is most likely inspired by an event of 1454. The event takes place in the castle square and involves the entire population. For this reason the town of Vicenza is nicknamed the city of chess.

The ancient legend tells the story of two brave warriors, Vieri da Vallonara and Rinaldo da Angarano, who in 1454 fall hopelessly in love with Lionora, daughter of the castellan Taddeo Parisio. To have the hand of the young girl they challenge each other to a duel. Tadeo decides to give his daughter in marriage to the winner of the noble game of chess. This happens during a festival in the castle square with the use of large and living pieces. In 1923, on the initiative of a group of citizens, it was decided to celebrate this event every two years. 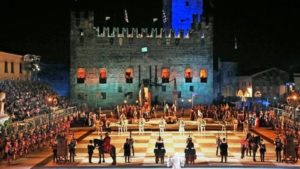 Being unable to reproduce the moves of the legendary match played in Marostica between Vieri da Vallonara and Rinaldo da Angarano, starting from 1954 the organizers have decided to take inspiration from the most beautiful games played in the world history of chess. Every two years a match is recalled. This takes place on the giant chessboard in the Piazza del Castello. The match to be interpreted is proposed by the local chess club and chosen by the organizing committee.

But that’s not all, a very important thing concerns the requirements that the match that is decided to dispute must have. This must end in no less than sixteen moves and no more than twenty. It must also be very spectacular and have a duration of less than twenty minutes. In the first edition of September 2, 1923, the one played in London on June 21st, 1852 between Anderssen and Kieseritsky was staged. In the following years and until the last edition, the match staged is the one that took place at the Paris Opera in 1858 between the American Morphy and two opponents.

The 2018 edition and where it takes place

This year the legendary match takes place on the days of 7,8 and 9 of September. The first two days the event starts at 9 pm, while on Sundays two shows are scheduled. The first takes place at 5:00p.m. and the second at 9:00p.m.. As usual, the event is held in Piazza Castello. This has 3600 seats that can be booked on the event website. Prices range from 15 to 80 euros.

After all ancient traditions are still celebrated today in Italy that involve the territory of origin. These are known and appreciated all over the world. If you want to discover other very interesting traditional events taking place in our country, we suggest you read this article too. Now that you know the legendary game of living chess in Marostica you just have to organize your visit to this incredible event.

The Sistine Chapel can be admired in Rome, in the Vatican City, within the famous and crowded Vatican museums. The...

What to see in Parabiago: the city of footwear

About 20 kilometers from Milan lies the delightful Parabiago, a town of about 28,000 inhabitants and nicknamed the...