Here’s how to prepare this dish of Neapolitan culinary tradition

Our country has an ancient and very varied culinary tradition. In fact, depending on the different regions there are particular recipes that are considered the symbol of the place of origin. One of these is the potato gattò that is prepared according to Campania tradition. Italian Tradition takes you today to discover this traditional dish. Here we will explain the ingredients and the steps to follow to prepare this dish.

The name comes from the French term gateau which means cake. In fact, the potato gattò is a savory pie made with potatoes. Its recipe is part of the ancient Neapolitan culinary tradition. Today its preparation is practiced in all the Italian regions even if there are some differences in the ingredients used. Its main characteristic is the fact that it is a single dish. Among the main ingredients used we find one of the most representative products of the territory, which is mozzarella.

Here is another thing, it became widespread within the Campania region after 1788 when Maria Carolina and Ferdinando I joined in marriage. During these years Naples was contaminated by the culinary traditions of the largest European cuisines, including the French one. The queen entrusted the management of her kitchens to high-ranking cooks. These were commonly called Monsieurs. These prepared recipes from France that were adapted according to the tastes and typical products of the Neapolitan territory. From this custom the potato gattò was born. 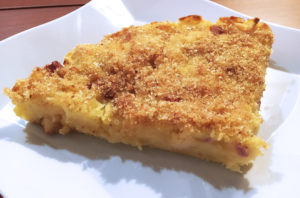 The main ingredients used to make it are the same in all Italian regions. There are many variations regarding those that are added. To prepare this dish the basic recipe is:

How to prepare it

In short, the first operation to be done to prepare this dish, which is part of the Neapolitan culinary tradition, is to boil the potatoes in unsalted water. Meanwhile, the ham must be cut into small cubes and the mozzarella cut into slices.

We suggest you use buffalo mozzarella that is typical of this Italian region.

Once you have all the ingredients ready, you have to butter a pan and sprinkle it with bread crumbs. Then take the potatoes and mash them in a bowl. Whisk two eggs separately and add them to the potatoes, paying particular attention to mixing the contents evenly. At this point add ham and mozzarella. Now the mix should be placed in a dish. As a last ingredient, add Parmigiano Reggiano. Now you can bake the cake. Cook for about twenty minutes at 200 degrees.

Just think, the Italian culinary tradition presents some dishes that derive from the combination with other national cuisines. This can be seen in some traditional regional recipes such as this savory pie of French origin. If you want to learn about other Neapolitan recipes we recommend reading this article too. Now that you know how to prepare the potato gattò you just have to get to work.

Spaghetti with Chianti wine is a traditional Tuscan dish. A super-quick, simple and tasty recipe prepared with a...

Pecorino cheese a true passion: varieties region by region. How many do you know?

The different varieties of pecorino present in the Italian regions Italy presents many gastronomic excellences that...