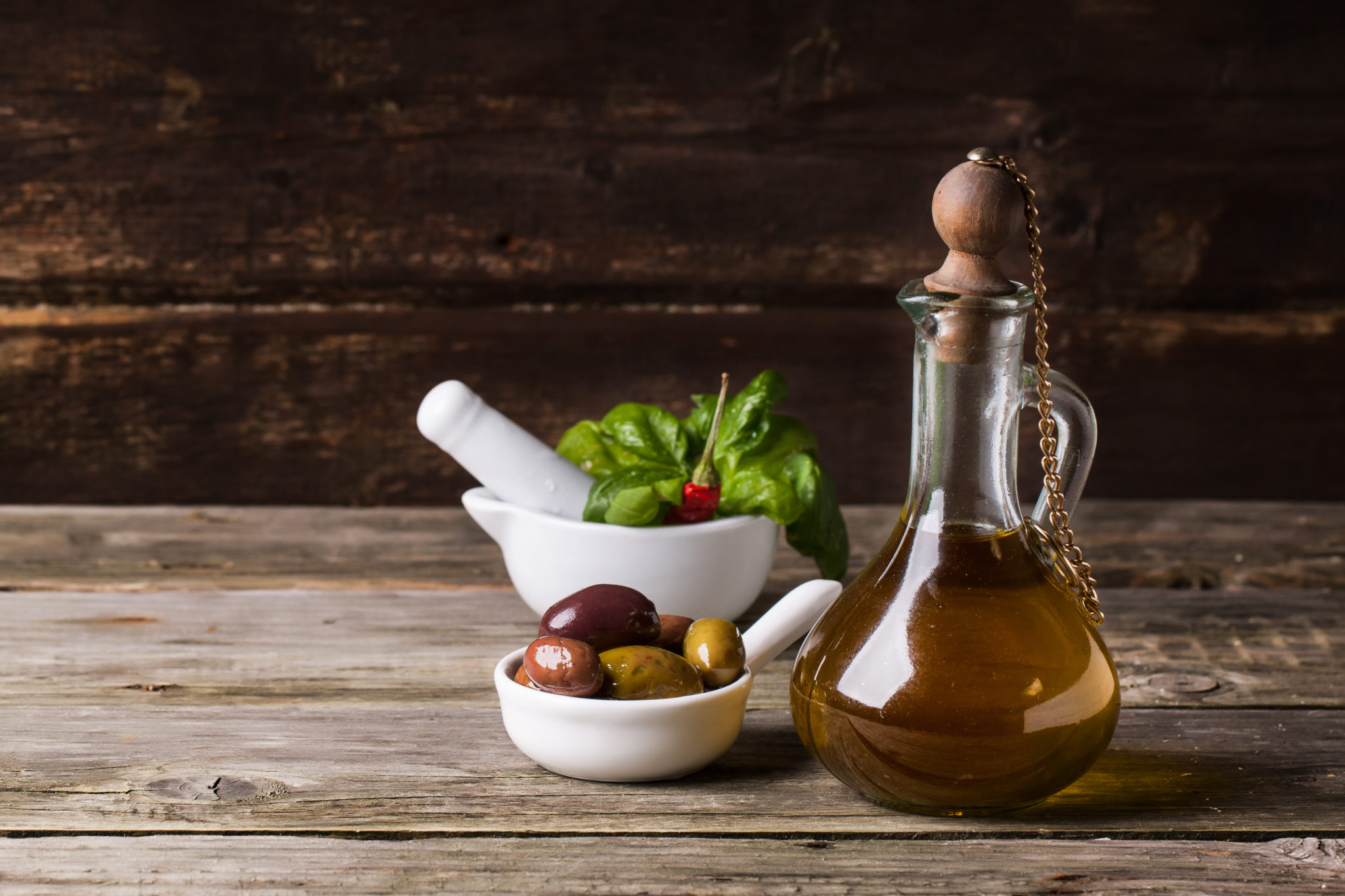 Typical Mediterranean food, ancient and valuable product, olive oil, according to the Italian legislation, the product obtained by pressing the fruit of Olea Europaea Leccino. Olea europaea, commonly called olive tree is a plant belonging to the Oleaceae family that is further divided into two botanical species: Olea europea sativa and Olea europea oleaster. Present in all areas bordering the Mediterranean Sea, the olive tree is rooted in our culture for thousands of years and for some years has been successfully exported to America and Oceania; its growth and spread is mainly linked to the weather, so the temperature and humidity, and, despite being the subject of export, oil production is predominant in indigenous areas.

The European Union is by far the largest producer and the world’s largest consumer of olive oil. This product, which always ranks among the basic ingredients of Mediterranean cuisine spread throughout the Union’s territory has now become part of the culinary traditions of a growing number of consumers, who have discovered and appreciated the intrinsic qualities . In Italy the production of extra virgin olive oil is the prerogative of the south: Apulia, Calabria and Sicily have an impact on national production by about 80% of all the olive oil produced each year in the Belpaese. The remaining production is divided  by Tuscany, Liguria, Umbria and Abruzzo.

Olive oil is not the same and certainly not everyone can boast of the title “extra vergine”. This is because various processing and the physical and chemical quality of the product. Knowing how they differ can help us make wise choices in view of a healthy diet. The classification of the oils is unique in the European Community and divides the “virgin” types that is obtained only for the pressing of olives by “non-virgin” that is rectified by a chemical process. An extra-virgin olive oil should have an oleic acid content (degree of acidity) not more than 0.8%. The quality of this depends on many factors: the cultivar (olivaggio), the status of the olive and the fruit at harvest, the technology used in the production, harvesting and extraction, storage conditions.

Main food of the Mediterranean diet, olive oil is particularly rich in monounsaturated fats, especially oleic acid. Thanks to its special composition of fatty acids is one of the best condiments to control the levels of bad cholesterol (LDL) in the blood. Rich in vitamins and antioxidants, fights aging, and not only as a good protector of the arteries, also assumes great importance in the prevention of cancer: it is strongly recommended to use in frying food because its smoke point is 140-180 ° and can reach 280 ° without burning due to its low acidity. Olive oil is mainly used as food, but also in therapy for the laxative properties and colecistocinetiche as hepatoprotector, against gastric ulcers and as a local softening. The decoction of leaves and bark is used to combat rheumatism, fever, hemorrhoids and to disinfect wounds and injuries. “The people of the Mediterranean began to emerge from barbarism when they learned to cultivate the olive and the vine,” wrote the great historian greek Thucydides in the fifth century BC. And so we think in 2016 AD. The history of the olive is the history that accompanies the development of Mediterranean civilization from its very beginning and is one of the most shared symbols.

“Clear and liquid crystal” sung by poets and holy and humble fruit of ancient traditions; fragrant and full-bodied ointment able to confer flavor and enhance the most delicate flavor, delicious caress for fine palates, the Italian oil reveals its secrets in the IT5 of the week.
100% ItalianAll ItalyFood & BeverageFood & BeverageOliveOlive Oil
Share

Sicilian baked pasta is one of the most popular dishes in Sicily and emulated by all Italian and non-Italian...

Dish par excellence of the beautiful city of Grado, enchanting islands in the province of Gorizia, which is one of...