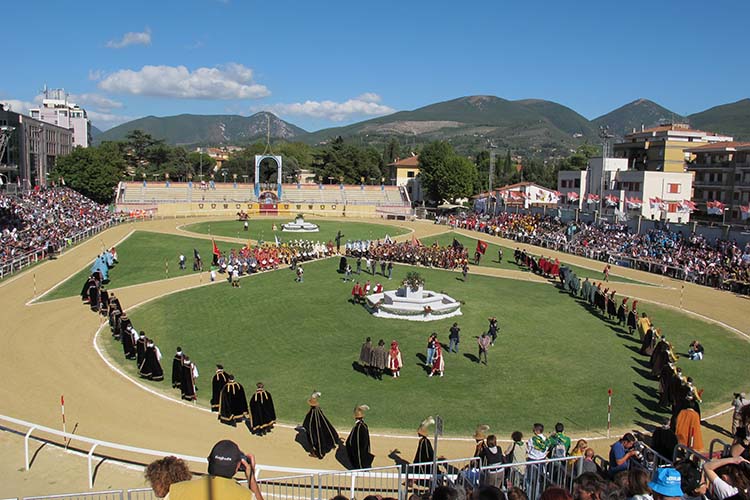 The first Joust of the Quintana took place in the central Italy village of Foligno in 1613. After being suspended for several decades, it came back in an almost unchanged form in 1946, as a feast to unofficially celebrate the end of the Second World War and a new era for the town. This is the closest thing to a real Renaissance joust you will ever witness, as the whole event was meticulously described by one court scribe allowing modern organizers to replicate every detail perfectly. The biggest changes are in the care everybody have for the horses, that are treated much more humanely than in the past.

The “Quintana” in question is a revolving statue of Mars, the god of war. One of its arms holds a shield, while the other is outstretched: it is from the latter that a series of metal rings are hanged for costumed riders to catch on their lances while galloping next to it. The rings get smaller and smaller as the game goes on, moving from eight to six and finally five centimeters of diameter. There are ten riders, representing the ten districts in which the town is divided. To be elected champion of your district requires exceptional skill and clout, for winning the joust bestows a huge honor on the few houses composing the ward.

The prize for the winning district is a large standard, painted each year by a different artist. The two dates listed above correspond to the opening joust and to the “return match”, which is usually much more heated due to the high stakes. A second and possibly even more spectacular event during the joust is the Gareggiare dei convivi (lit. “Contest of the tables”), in which the districts challenge one another in organizing the most spectacular banquet for 60 costumed guests. The Renaissance-themed dinner has a general guideline: in 2013 it was, in example, “the waterfowls”. The excellent quality of the dishes however takes second place after the presentations, in a quest for upmanship that can involve acrobats, troubadours, jesters, fire-eaters, transforming sculptures and whatnot.

Around the days of the Quintana the whole town comes alive with side events including concerts and a singing contest, street shows, an art contest and La grande misticanza (trans. “The great chewing”) the Renaissance equivalent of a pub crawl in which each district’s tavern offers a selection of unique dishes.

What to see in Italy? Here is the most important Italian fashion event Are you looking for something to do in Italy...