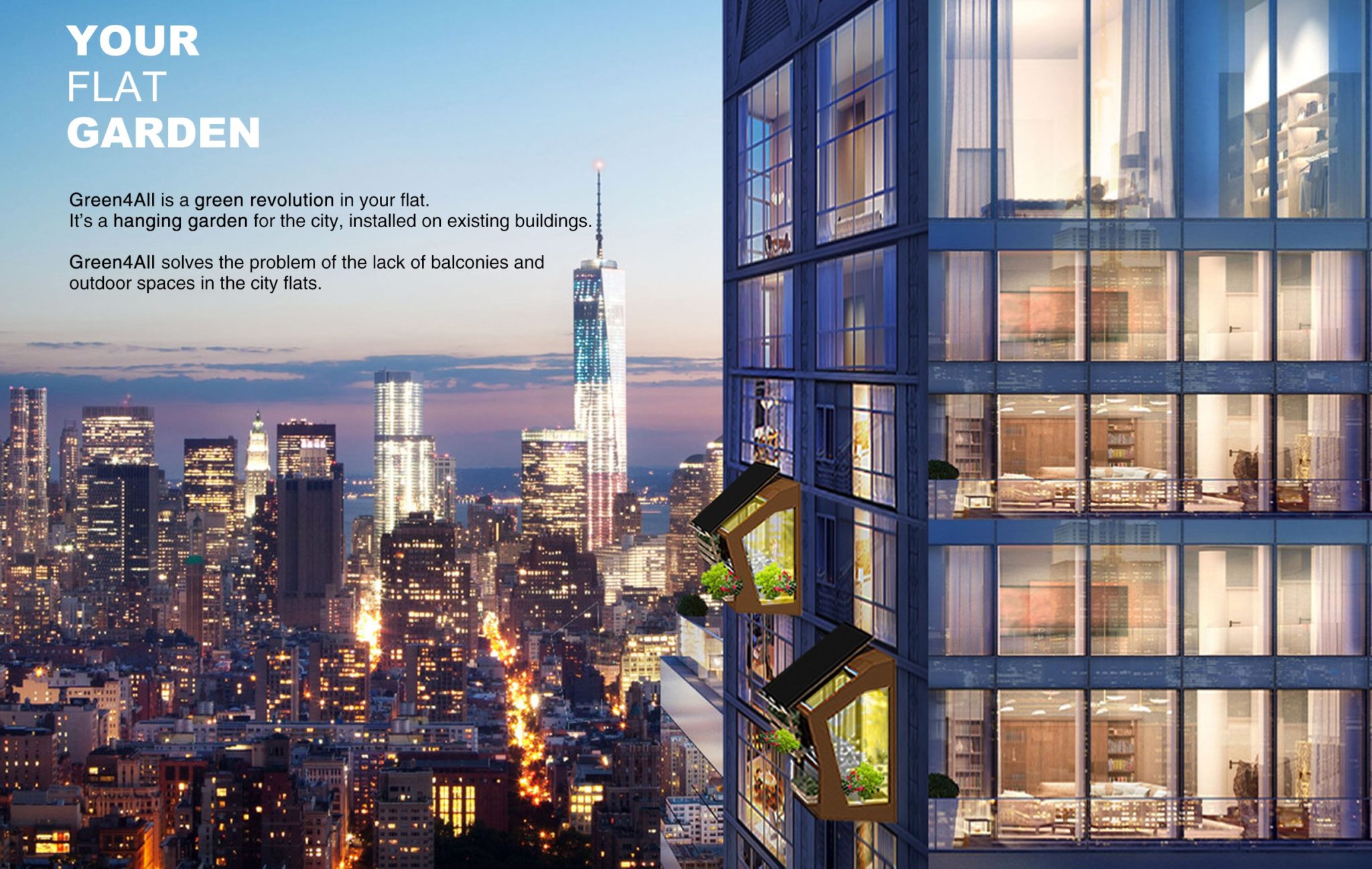 I meet the architects Francesca Perricone and Roberta Rotondo at the Bic Lazio headquarters in Rome, which supports territory development through the creation of new companies and the strengthening of existing ones. Here Roberta and Francesca are completing their ‘incubation’ period, ie the transition from idea to enterprise, thanks to valid consultants who support them in updating their professional agenda, analyzing the requests of the local economic network and find the right interlocutors to start and consolidate their business and their project.

That of Roberta and Francesca, architects and PhDs in environmental design, whose collaboration was born in the academic field, was and is a great undertaking, even intended as a challenge. After leaving the university world of which they were part and in which they were doing research, they decided to start their own business.

Their ambitious project is called Green4All. This is a 2-square-meter hanging greenhouse designed for buildings that do not have outdoor spaces, views or balconies. An extra environment, livable all year round. It simply flanks the outside of the building and is accessible from inside the house. It closes in winter and opens in summer, just like a greenhouse. From an energy and water point of view the greenhouse is totally self-sufficient: it has a photovoltaic system that produces and stores electricity and a system for filtering and recovering rainwater. Inside the greenhouse there is a vegetable garden, a hydroponic system for domestic cultivation and a compost bin for the recycling of organic waste. Precisely a virtuous cycle of renewable resources. 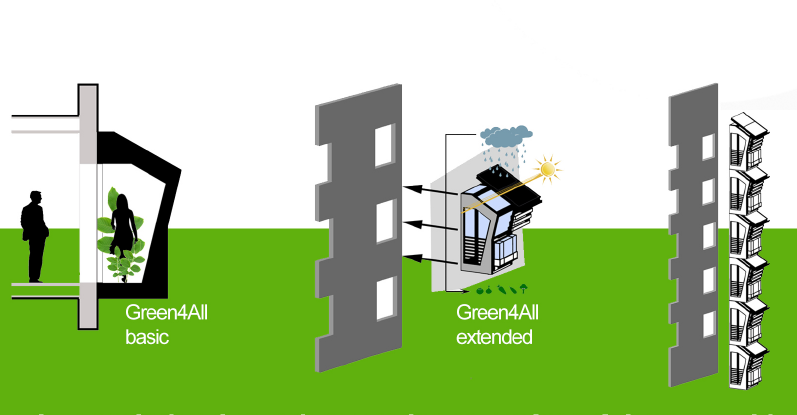 Their forward-looking and enlightened research has always been oriented towards transforming what already exists.

“Italy has a huge asset to exploit, it must be revisited and retrained. We are convinced that the architecture of the future can be interfaced with that of the past, creating a new concept of housing. Certainly more aware and clean, limiting the consumption of soil, both in terms of architecture and urban spaces and aimed at efficiency and energy savings. Also because Italy, due its impressive architectural history is not a country used to demolishing, to find spaces for new buildings will become increasingly complex. Fortunately, in Italy we have made progress also at the regulatory level, now we have a range of rules concerning bio-construction and energy efficiency that have been well received by the Regions. There are six sensitive Municipalities in Italy but they are still all concentrated in northern Italy, such as Bolzano, Cinisello Balsamo and some districts of the city of Milan. Because today sustainable development is no longer just a fact that concerns some environmental governments but has become part of the public res. “

The hanging greenhouse was designed in the first instance to improve the energy efficiency of buildings and contributes both to saving energy and to the functional redevelopment of the residential area.

The Green4All project was officially launched in October 2015 when Roberta and Francesca won the ‘SmartForCity’ competition organized by Mercedes spa and created the first prototype in the so-called ‘beta’ version, as part of the H-Farm acceleration program and they got to test the prototype for 6 months.

In October 2015 they filed the patent application for industrial invention in Italy and since May 2016 the project is ‘incubated’ at the Rome office of BIC Lazio, of the Lazio Region. The prototype has participated in various exhibitions and has been exhibited at various conferences including: Klimahouse Fair – January 2017- Bolzano; Maker Faire – October 2016 – Rome with the Lazio Region; Creativity Day – December 2016 – Rome with the Lazio Region; Your boarding pass to Chile, May 2016 – Rome – in collaboration with RLazio and the Embassy of Chile in Rome.  Innovation and corporate social responsibility Exhibition – October 2015 – Milan Bocconi University

“But, as the architects explain to me, the project is the result of long years of experimentation in the field of environmental design, already started at university, and our passion for sustainable architecture, then put into practice slowly participating in many “Redevelopment projects of existing buildings. It would be nice even today to be able to take care of the redevelopment of many suburbs that would enjoy a great benefit from our invention. “

Green4All in fact allows anyone to participate in the sustainable redevelopment of their cities. It is aimed at both private citizens and municipal administrations, companies, institutions and real estate groups who want to improve the quality of their properties, the well-being of users and to protect the environment. Green4All is an industrial, modular product that combines these features with the adaptability to the specific conditions of the building on which it is installed and to the needs of users. In fact, more modules can be stacked by creating a façade system and connecting the systems on the network.

For the moment, the first batch project is ready to start production.

“But we are trying to identify – also thanks to the Bic Lazio consultants – the right kind of partner to support us in the production and the type of intervention to be done. For example, we are thinking of a pilot project to be shared with the population of a degraded reality in order to enhance the social context, to make communities more aware of recycling and renewables. We are looking for sponsors to support us and also an institutional co-participation, “

Speaking of figures Roberta and Francesca tell me with extreme transparency that the column version of a 4-storey building would be around 50 thousand euros.

An ambitious project but not unreachable given the feedback and the many awards received so far. The last one but not in order of importance: among the 10 finalists of the Klimahouse Startup award. Chapeau ‘.

Roberta Rotondo, CEO, architect and Ph.D. in environmental design. Since 2004 she has been involved in research activities both in the academic and working fields on environmental planning and eco-sustainable technologies. She is specialized in eco-compatible recovery of existing buildings.

What to visit in Sicily: the Castle of Falconara

Acero Rosso, The scent of wood

Creativity, craftsmanship in every detail, the continuous and careful quest for the quality of materials and the...

Via Garibaldi 12, Where good taste is the specialty

Via Garibaldi 12 it is one of the most extraordinary realities of the city of Genoa. A shop, or rather, a concept...