The Scasada del Zenerù is a typical event of the small town of Ardesio which is held every year at the end of the colder days of winter. During the event, the locals hunt Zenerù, a puppet of paper and rags that, in fact, symbolizes the icy winter. The event is very felt by the whole population, but especially by children, who enjoy crowding the streets of the small village, shouting with delight and making noise with anything they can find, from pots and pans, plates, glasses and cowbells. 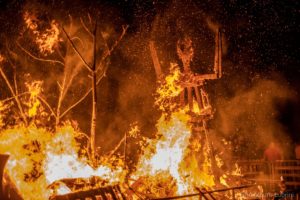 The Scasada del zenerù (or Dòl zenerù, dialectal) is a celebration held every 31st January in Ardesio, a village in the upper Seriana Valley, in the province of Bergamo. The Scasada del Zenerù, which translated into Italian literally means “banishing Winter”, is a manifestation that is held at the end of the three days of the blackbird, or those that, ideologically, are meant to be the three coldest days of the year. During the festivities, all the inhabitants of the village descend into the streets to hunt down a puppet (zenerù) that is supposed to represent the cold winter. To do this, they run from one part of the town to the other making noise, beating on old pots or waving large shepherd bells. Once the puppet has been found, they take him to the center of the main square and “banish him”, by burning him at the stake symbolizing the end of the icy winter.

What to see in Ardesio

Ardesio is a small municipality, which counts little more than 3000 inhabitants but, nevertheless, it has many points of interest. It is in fact a small characteristic village, which besides being visited on the occasion of the Scasada del Zenerù, can easily be visited at any other time of the year and represents a valid destination for a pleasant trip. Among the main attractions are certainly the Madonna delle Grazie sanctuary, in the historic center, and the ethnographic museum just a few steps from the sanctuary itself. Inside the ethnographic Museum of Ardesio the life of the populations over the past centuries is narrated with words, finds and images. A wonderful way to really understand the philosophy of the inhabitants of the mountains and their lifestyle in what was a time less facilitated by technology.

Where to stay? What to eat?

If you are about to visit Ardesio to participate in the Scasada del Zenerù, we have some advice for you. The small Ardesio is a mountain resort and is also a valid winter locality for snow lovers, that is why despite its small size it is quite well organized from the tourist point of view. But where to stay in Ardesio? What to eat? We suggest you find information at the accommodation facilities of the place, such as the Hotel Ardesio da Giorgio (also equipped with an excellent restaurant) or the famous Hotel Bigoni. Among the typical dishes, surely, the best ones are meat-based, fresh and coming from locally bred livestock. A great restaurant is that of the Locanda del Cacciatore.

Sanremo Festival 2019: dates and where to watch it

Why do we say “fare la scarpetta” (mop your plate with bread)?

When the Italian language is combined with the best delicacies of our cuisine what comes out is a fabulous...

Highly diffused in the South of Italy, specially in Puglia in the Salento area, Masseries are big old fortified...