The Ancient and Noble Art of Shoemaking 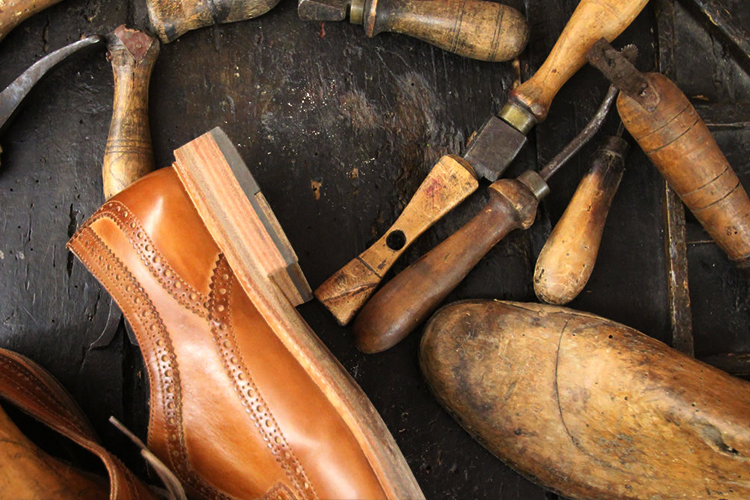 The shoemaker, also known as cobbler, is one of the oldest professions in the world. One of those artisan professions that is slowly disappearing in modern society. In the past, cobblers, as they were once called, were considered virtually indispensable: it was very expensive to make shoes due to the high costs of raw materials, so it was necessary to repair them several times, changing the worn parts and using the shoes up until they were completely ruined. In an effort to take you back in time, Italian Traditions will tell you all about the noble and magical art of shoemaking, a sector that today is in search of new life!

Shoes date all the way back to the prehistoric era when men began wrapping their feet in animal skin in order to protect them. The Greeks and the Romans, as evidenced by numerous frescoes, protected the feet with sandals, which were built by intensely working the leather. Both wood and leather shoes became widespread in the Middle Ages, which, during the fifteenth century in Europe tended to be made of cloth and pointy. Finally, in the seventeenth century, the first shoes high heels and the first boots were created.Apart from being used to cover your feet, shoes steadily became a way to exhibit economic greatness and power. The best footwear on the market was reserved to well-off families, talented artisans who worked on their craft from small shops where these more experienced craftsmen availed themselves on the collaboration of young apprentices for the preparation of raw materials.

In addition to producing new shoes, shoe shops prided themselves on the repair of old or worn parts of the shoe, which was quite popular because the high costs of new shoes did not allow people at the time to upgrade the footwear frequently. In the twentieth century, with the massive spread of industrialization, which extended to all fields, we witness a major change: with the increase in demand for new types of shoes, craft production quickly turns into industrial production. The result is the slow disappearance of a number of skilled artisans forced to abandon their shops and to move into industrial facilities. With constant growth in the footwear industry, the number of shoemakers was reduced, and for those few artisans remained in business, the work left includes repairing worn out shoes to the lower class.

In recent years however, there’s been a modest a revival of this ancient profession in the Belpaese. At a time of economic crisis like the one we are currently going through, a shoemaker’s work seems to be making a quiet comeback. According to surveys conducted in recent years by some important Italian newspapers, it seems that young people are rediscovering the ancient crafts of the past with pleasure, and among these the popular profession of the cobbler. The search for a customized, a tailor-made shoe for the upper class has diffused tremendously among socialites. However, they are not the only ones, as this new revived trend has become a commonplace among many who have rediscovered the virtues of craftsmanship and are starting to forget the anonymous industrial shoe.

Get far with Italian style. Luxury at your feet, for who isn’t ever willing to give up class. Walk with us towards the discovery of the IT5 of the week.
100% ItalianAccessori & AbbigliamentoAccessories & ClothingDESIGN MADE IN ITALY
Share

One of the Sardinian carnival masks: the Mamuthones Carnival in Sardinia (Carrasegare) is one of the most evocative...